We've made it clearer what actions can be taken for a suggestion.

Like before you can Skip a suggestion by using the arrow buttons. This is useful if you might want to get back to a suggestion later.

If you're not interested in a suggestion you can also Remove it and Donna won't bring it up again. This could be useful if Donna points out that a term is not defined but you know it's defined in another document that will be attached later. Technically Donna was correct, but you know better ☺️

✅ Now when removing a suggestion Donna will also take care to automatically remove related suggestions, so you no longer need to click Remove dozens of times.

If you believe Donna wrongly added the suggestion you can also Report a Mistake. This will not only remove the suggestion but also update your Donna to make fewer mistakes like this in the future.

Finally we've made it clearer when a suggestion has a Quick Fix available. Just click the Apply Fix button for Donna to make the suggested changes for you. And stay tuned because we'll be releasing a lot more "quick-fixable" suggestions soon!

Did Donna ever give you the Duplicate Clause suggestion? Did you also get frustrated that Donna didn't tell you where the other duplicate was. Well, be frustrated no more. Donna will now list the location of the duplicates under related information.

Donna now feels much snappier when snoozing or removing a suggestion.

We did this by instantly updating the UI rather than waiting for our servers to reply. In 99.9% of cases things go fine...which means now you don't have to wait around.

If something goes wrong, then we will always put the original suggestion back in the queue for you.

Donna will no longer confuse a reference to a Definition Section with the term actually being defined.

will no longer mistakingly show up as Duplicate Definitions in Donna's list of suggestions.

Highlight at the Speed of Thought

The beautiful highlights in the document now feel a lot snappier. They show up quickly and you should notice less lag when scrolling.

When reviewing suggestions, we've also made it easier to focus on the task at hand. By only highlighting the suggestion that you're currently reviewing it should be much easier to spot where the problem is within your document.

You can now more easily pick a few items to snooze instead of having to unselect every item individually. Just unselect the Select All checkbox and only select those which were relevant.

Donna has also learned how to better group similar suggestion. So ironically you will be less likely to use the Select All button, since most suggestions should be relevant. 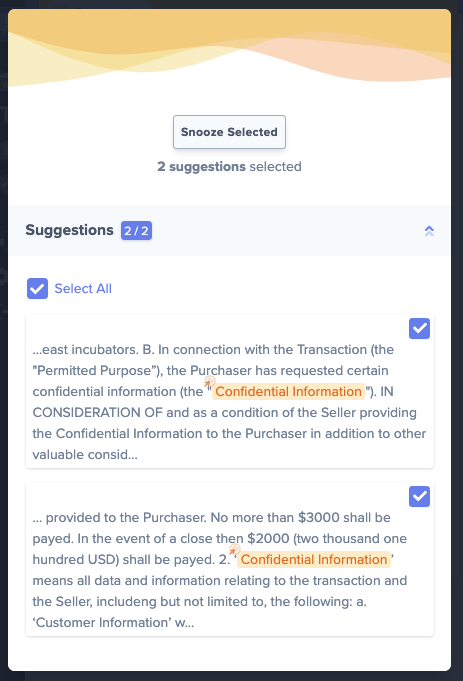 Although Donna is simple to use there is a tremendous amount of AI power happening behind the scenes. Our servers have about 10x more memory and CPU power than your top-of-the-line laptop.

Despite all this power, large documents could still take quite some time for Donna to analyze. In some cases more than a minute.

Instead of adding more power, we used our brains this time. We tought Donna all sorts of ways to stop overthinking a particular problem and just speedread on. So now analzying that same document happens in only a few seconds!

We now also compress the data sent between Donna and your computer so that even on slower internet connections results should come in much faster.

Donna makes mistakes but you can now help her learn. Either by removing bad suggestions (instead of Snoozing them) or by sending feedback.

Removing a suggestion will teach your Donna to better understand your documents and make fewer mistakes in the future. It also helps our team to prioritise fixes based on statistics of how frequently a type of suggestion is removed.

If you have a bit more time you can provide some additional feedback. Just a small description of what you think the problem might be can help our team to quickly resolve any underlying problems. You als 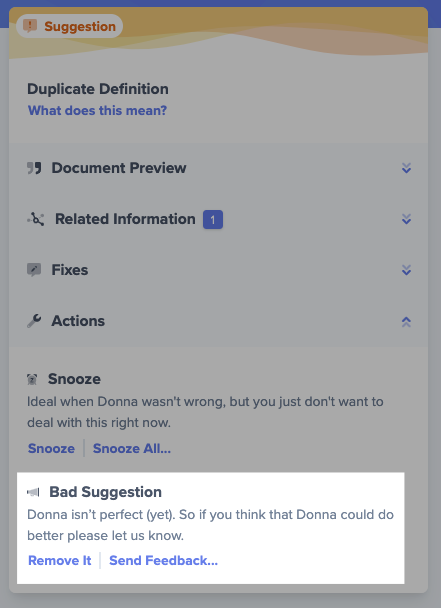 o have the option of giving our engineers access to a "nonsensified" sample of your document to further help us identify any issues.

Note: We "nonsensify" a document by replacing every word with another word before sending the document to our bug report system. Our engineers get a limited time-window to access this document and although the structure of the document is intact it looks like complete gibberish!

Create yours, for free!